bz: I sent this article to HATJ, 17 minutes after the BBC published it. This was her reply

p. s. : and from personal experience…. stay as low to the ground as possible before shutoff/reboot…. LOL

Subject: RE: US staff in China: Beware of unusual sounds

apologies for the delay

series of strategic events occurring… just to our pod… lol

appears this pod is in lockdown all day…

my reference to shutoff/reboot was made specifically to remind those that employ such frequential/vibrational tools…that they were given many experiences (not just by me) that such tools are naturally neutralized by the flow and application of consciousness… and now…with the advanced expansion, and application, of consciousness within each on this planet…such tools are irrelevant, let alone ineffective <3

my apologies to everyone, for not identifying the intended audience of that statement… a very specific and small audience it was…:)

just fyi… i usually am speaking to multiple layers of audience at once… delivering specific data for each, at one time…multiple conversations within one conversation… or like an infinite russian doll, may be more accurate…as all flows!

Subject: RE: US staff in China: Beware of unusual sounds

love you love all

US warns staff in China: Beware of unusual sounds 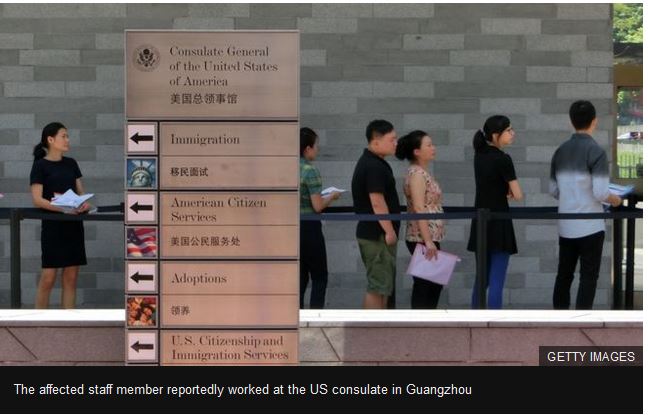 The US state department has urged its staff in China to alert them to any abnormal hearing or vision issues after one employee reported mystery symptoms.

The person experienced “subtle and vague, but abnormal, sensations of sound and pressure”, a statement said.

Secretary of State Mike Pompeo said the incident was “medically similar” to suspected sonic attacks on diplomatic staff in Cuba.

China-US relations have been strained recently, amid fears of a trade war.

The state department said it was taking the incident “very seriously”, but the US has not accused China of being behind it.

What happened in China?

Embassy spokeswoman Jinnie Lee said the employee had suffered a “variety of physical symptoms” between late 2017 and April 2018 while working at the US consulate in the city of Guangzhou.

The employee was sent back to the US, and on 18 May the embassy learnt that they had been diagnosed with mild traumatic brain injury (MTBI), Ms Lee added.

“We do not currently know what caused the reported symptoms and we are not aware of any similar situations in China, either inside or outside of the diplomatic community,” the US diplomatic statement said.

“The US government is taking these reports seriously and has informed its official staff in China of this event,” it said.

The statement continues with a warning: “While in China, if you experience any unusual acute auditory or sensory phenomena accompanied by unusual sounds or piercing noises, do not attempt to locate their source. Instead, move to a location where the sounds are not present.”

Ms Lee said the Chinese government had given assurances that it was also investigating and taking appropriate measures.

Was this a sonic attack?

Parallels have been drawn with the suspected sonic attacks in Havana.

Mr Pompeo told the House of Representatives Foreign Affairs Committee that the occurrences were “medically similar”, adding that medical teams were on their way to Guangzhou to investigate.

However, there is nothing so far to link the China incident directly to Cuba.

“We cannot at this time connect it with what happened in Havana but we are investigating all possibilities,” a US embassy official in Beijing told AFP news agency on condition of anonymity.

What happened in Cuba?

In November 2016, US diplomats based in Cuba started to complain of odd ailments, including dizziness, nausea and hearing problems.

More than 20 members of staff in Havana were harmed in the “health attacks”, according to the state department. At least two Canadians were also affected.

The US has held Cuba responsible, either for allowing the suspected attacks to happen or for carrying them out itself.

Cuba has denied any involvement, and described the reports as a “political manipulation” aimed at damaging bilateral relations.