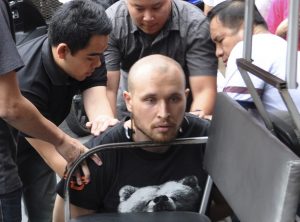 Sergey Medvedev, center, is arrested for his role in an international identity theft ring that sold stolen credit card information, leading to losses of over $530 million. Crime Suppression Division of the Thailand Police via AP

The Russian National is accused by U.S. authorities of running an online Cybercrime market

BANGKOK — Police in Thailand announced Friday they have arrested a Russian national accused by U.S. authorities of running an online cybercrime marketplace where everything from stolen credit card information to hardware for compromising ATM machines could be purchased.

Police said that Sergey Medvedev was arrested at his Bangkok apartment on Feb. 2 at the request of U.S. authorities.

The U.S. Justice Department on Wednesday announced indictments against 36 people accused of being active in the Infraud Organization – founded in 2010 and operated under the slogan “In Fraud We Trust” – which was an anonymous online forum that the department described as a “one-stop shop for cybercriminals.” It said it had nearly 11,000 members who traded more than 4.3 million credit cards, debit cards and bank accounts worldwide, leading to losses of more than $530 million for legitimate users and businesses.

The U.S. indictment described Medvedev, 31, as the group’s co-founder along with Svyatoslav Bondarenko, and said he had operated a payment system for the forum’s members. It said Medvedev became the website’s owner and administrator when Bondarenko went missing in 2015.

“Before the operation could be ready, they had to recheck their targets in various countries,” Nutthapong said, adding that the case against the Infraud Organization began in 2014 when a U.S. Homeland Security officer sent an undercover agent to sign up as a member of the Dark Web forum.

On Thursday, 13 of the wanted persons were taken into custody across the globe, including in California, New York and Alabama. Suspects arrested in France, the United Kingdom, Italy, Australia, Kosovo and Serbia are awaiting extradition.

Medvedev will be extradited to face prosecution in the U.S., Nutthapong said.

The police statement said officers were able to arrest Medvedev by performing stakeouts, behavioral analyses, and by investigating his online activity.

Last year, Thai authorities arrested the alleged operator of Alphabay, a massive Dark Web marketplace where illicit items such as narcotics and guns could be sold or purchased by anyone, unlike Infraud, which vetted its members. The alleged Alphabay administrator, 26-year-old Canadian Alexandre Cazes, was found dead in his Thai prison cell shortly after his arrest, a suicide by hanging, according to Thai police.