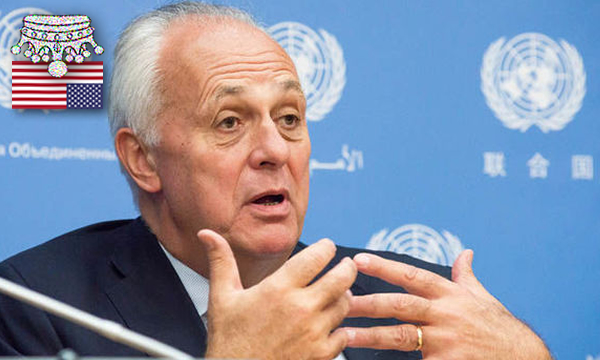 This posting  was publish a while back, but it is worth posting again for awareness indeed. It is a good idea if you read the following article first for a better understanding: http://freeport1953.com/leader-technologies-files-trillion-dollar-bond-lien-on-the-u-s-government/

He rigs elections from Venezuela & Estonia to USA

He rigs electronic voting machines owned by him, George Soros and Mitt Romney

He steals trillions of dollars from inventors, Main Street and a rigged global stock market

His slogan should be Make America British Again

WARNING: We have uncovered more than 3,540 relationships that Lord Mark Malloch-Brown has failed to disclose to the public in any securities and ethics disclosures. Here is the raw Excel spreadsheet.

(JUN. 19, 2018)—The kindest thing we can say about Queen’s Privy Council kingpin Lord Mark Malloch-Brown is that he is certainly one of a kind.

It has taken an entire group of researchers over a month just to gather the facts about him. These facts are scattered across the Internet in many dozens of biographies in an evident strategy to confuse people about his background. No two are alike. These convoluted biographies are telling for a man with literally trillions of dollars at his fingertips; meaning he can buy national elections anywhere on the planet, but he cannot seem to write his resume. (Note: Such biographies are an early clue of a corruptocrat who is hiding his secret activity.)

New, previously undisclosed associations were uncovered during this research. For example, Malloch-Brown has never disclosed anywhere his advisory role in the Institute for Global Law and Policy (IGLP) at Harvard Law School (ca. 2009).

It should be remembered that FBI Director James B. Comey was chief counsel at HSBC and Lockheed Martin before Obama appointed him as FBI director. Lockheed and SERCO run AWE Management Limited, Britain’s atomic weapons establishment. AWE is controlled by a Queen’s Golden Share. His predecessor (and mentor) FBI director Robert S. Mueller, III‘s firm Wilmer Hale LLP had most of these companies as clients.

WARNING: We have uncovered more than 3,540 relationships that Lord Mark Malloch-Brown has failed to disclose to the public in any securities and ethics disclosures. Here is the raw Excel spreadsheet.UPDATE, Jul. 25, 2018: The Malloch-Brown Bio PDF web links now work. 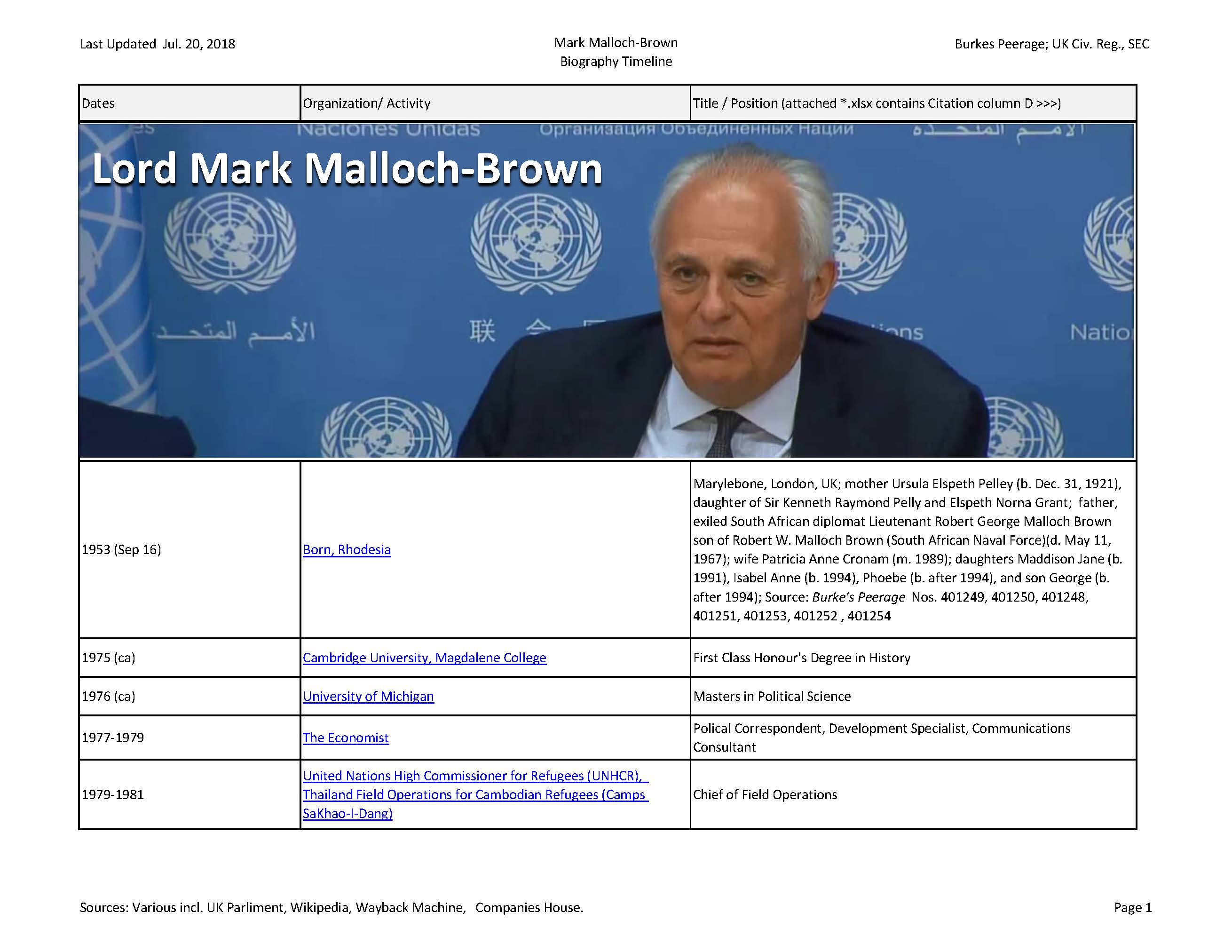 WARNING: We have uncovered more than 3,540 relationships that Lord Mark Malloch-Brown has failed to disclose to the public in any securities and ethics disclosures. Here is the raw Excel spreadsheet.

Now that Lord Mark Malloch-Brown’s relationships are gathered in one place (see biography timeline above), he makes Mafia don’s look like choirboys.

The evidence of his depraved global corruption is unmistakable.

THEY HIDE BEHIND THE QUEEN’S COVER

Hiding behind the Queen’s brand, their goal is a one-world government administered by unelected UN bureaucrats and directed by the Privy Council. It is also clear that the United States is to be their primary source for weaponized inventions, a killer 5G satellite population reduction plan through “The IBM Internet of Things,” combined with killer pharmaceuticals, and a global police force.

As case in point, right now, today, the British Privy Council-directed SERCO company runs the U.S. Patent Office, FEMA Region 9 (AZ, CA, HI, NV and Pacific Islands), 63 U.S. FAA air traffic control towers and the Obamacare website. They also help manage the U.S. Department of Defense’s Space Wars program! Besides the obvious betrayal of sovereignty by Deep State shadow government Senior Executive Service (SES) officials who have orchestrated this, this is evidence that Malloch-Brown’s Privy Council plans are much further along than one can possibly imagine.

We believe we are in the RED ALERT zone.

The mind control message to British citizens has always been that the Queen is their mother. Most believe she is a figure head with no real power. This is dead wrong.

When British industries “privatized” in the 1970’s, the propaganda was that private investors would be allowed to democratize company holdings. What actually happened was that while investors were allowed to buy shares, the real control of these industries merely shifted from overt to covert control by the Crown through the Queen’s “Golden Share.”

This “Golden Share” gave the Crown—or more specifically, the Queen’s advisors on her Privy Council—veto power over operations. This allowed the Privy Council to drive markets up and down at will, while being protected from liability for illegal activity by the Queen and her Queen’s Court.

Our research has proven that the British Crown never really stopped ruling America after 1776. They merely shifted priorities from trying to dominate America militarily to dominating America through banking, commerce and finances.

When you think about it, it makes sense. When the British Army was defeated and sailed home, Americans woke up the next day and carried on with their lives, commerce and trade. They continued to pay on loans to British banks and continued trade with the British. They continued to discourse with relatives, friends and loves ones back in Britain.

Since little changed economically after 1776, the British banks moved in, and are still here today. If you doubt, investigate who controls the U.S. Federal Reserve. At its heart the Fed is controlled by an unpaid Woodrow Wilson debt obligation to the Rothschild family. The Rothschilds control the Bank of England, hold multiple “honours” and are members of the Queen’s Privy Council.

A major reason American patriots rebelled against the British monarchy was its abuse of power. The colonies were being oppressed by high taxes, abuses of property and privacy, no representation, rigged courts and a profligate aristocracy.

This same dynamic exists in the Queen’s Privy Council. As Queen Elizabeth has grown older, her Privy Counselors have grown more bold in their abuses of power, it appears. Any checks and balances that may have been there during her younger years appear to be gone. Her counselors are now using this unchecked power to attempt to takeover the world. Literally.

To accomplish this, the Queen’s Privy Counselors appear to have hidden behind her brand, and very slowly and deliberately devolved power from the Privy Council to trans-national corporations that they own, through secret inter networked banks, lawyers, accountants, money launderers, drug traffickers and rogue spies allied with an unelected U.N. bureaucracy that they control.

THE PRIVY COUNCIL EXPLOITS THE QUEEN’S GOLDEN SHARE TO HEDGE STOCKS, AT WILL

Think about it, it makes perfect evil sense. As a Privy Counselor, you can use the power of the Queen’s Golden Shares in major industries to drive markets up and down based solely on what you say in a board of directors meeting. Prior to doing that, you will have tipped off your co-conspirators, like George Soros, when to buy and when to sell stocks in that industry.

Thus, you and your co-conspirators make money when the stock goes up, or goes down, based on your exclusive insider trading tips. In fact, the Queen’s company might actually lose money on some transactions, but you don’t care since Soros’ hedge fund (your bunk buddy) will have profited from whomever you spooked to buy high or sell low. Your piece of the action will then appear magically in one of your many offshore bank accounts.

But this power has also plunged the depths of depravity. Just imagine you are recruited into a secret club of globalists who are able to make their own legal and financial rules. You can do what you want, even if it is immoral.

This is the Queen’s Privy Council and the United Nations plan for us. Exploitation, abuse and euthanasia. They don’t even hide the fact that they want to exterminate 75-90% of the world’s population (see video-taped comments by eugenicists Prince Philip and Ted Turner).

The Privy Council currently has 597 members.

Now imagine that you are a moral person who is invited to join the Queen’s Privy Council. After reviewing this immoral racketeering run out of the Council, you would certainly walk away.

Simple logic tells us that the 597 ‘remainers’ on the Privy Council are all corrupt.

The Queen’s Privy Council is arguably the world’s more powerful insider trading organization. It is fully protected and shielded from accountability by the Queen. Since we just proved by simple geometric logic that a moral person will not tolerate the unscrupulousness of this secret club, then the only logical conclusion is that ALL the members of the Queen’s Privy Council are corruptocrats with Lord Malloch-Brown leading the pack.

Lord Mark Malloch-Brown’s resume is bloated. Take a deep breath before you dive in, otherwise, you will run out of oxygen.

Lord Mark Malloch-Brown is 64 years old. He is married to Patricia Anne Cronam and has four children, Maddison, Isabel, Phoebe and George. His father was Lieutenant Robert George Malloch Brown and his mother is Ursula Elspeth Pelley. These individuals are his principle beneficiaries who should be denied any benefit from his ill-gotten gain that includes the slaughter of millions of people during their consolidation of this power.

His online resumes hide more than 3,540 globalist relationships. These relationships have taken a whole team of researchers more than a month to chase down and verify. This biography-timeline is undoubtedly the most complete Malloch-Brown resume available. We encourage you to download it and share it widely. This information has an uncanny way of disappearing from the web once it becomes public.

IF THEY CAN’T GET VOTES WITH LIES & BRAINWASHING, THEY’RE GOING TO OUTRIGHT CHANGE ELECTION RESULTS

During the course of this research, it took an unexpected turn. Malloch-Brown does not hide his deep associations with globalist warlord George Soros—who does not appear bothered by comparisons of him to Satan (Financial Times, Sep. 28, 2004). [Update: This article was removed from public access, but a copy has been obtained.] Malloch-Brown also does not hide his ownership and control of the electronic voting machine Smartmatic.

Further digging discovered that the “OpTech” software engine inside Smartmatic was ordered by the Obama-Holder Justice Department to be deployed in all electronic voting machines used in the U.S. including Smartmatic, ES&S, Diebold, Sequoia, Dominion and Hart InterCivic.

While technology insiders have been warning about this corruption for years, it now appears to be reaching the consciousness of the general public, thankfully. See Citizens Can Prevent Election Fraud, American Intelligence Media (May 2, 2018).

The bottom line is this: Lord Malloch-Brown’s globalist forces have hijacked the entire landscape of electronic voting machines, have weaponized them, and are poised to strike during the 2018 midterm elections.

Patriots across the country are now calling for a “back to the future” solution: (1) IDs, (2) paper ballots, (3) inked thumbs, (4) unbroken bipartisan chain of custody and (5) abolish use of the Avid ISIS LeaderPlus teleprompter propaganda device during the election cycle. It really is that simple.

What follows is a one-page summary of the clarion call for scrapping these weaponized globalist-takeover voting systems. 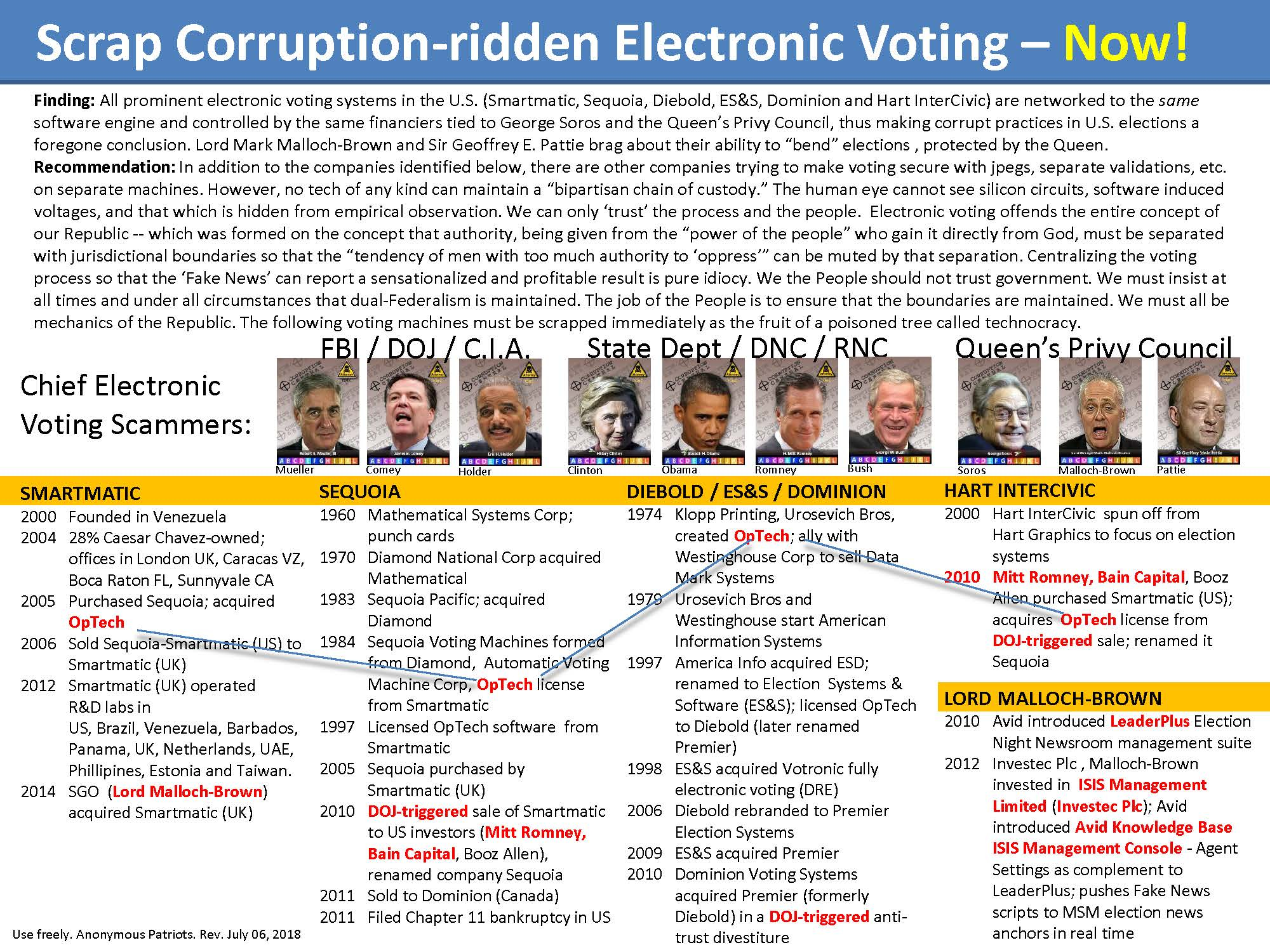 We must protect the vote. Now. We cannot allow these criminals to hijack any more elections. Free and fair elections are the property of the citizens in this Republic, not the government. We have gone to sleep. Now that we are awake, we must take action across this country in the coming weeks to protect the 2018 midterm elections.

In addition, God-fearing citizens of the United States and the world must call upon President Trump and loyal American leaders to defund the feeder systems used by these SES corruptocrats.

Ask President Trump to write the check to Leader Technologies for their Miller Act Notice so they can help implement new technologies that respect Constitutional privacy and property and help implement a truly Free Press.