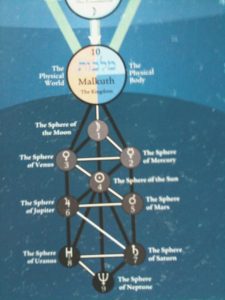 Our Atomic Star The Paranishpanna

A divine  Ray exists within each human being. That Ray wants to return back  into its own Star that has always smiled upon it. The Star that guides our interior is a super divine Atom from the Abstract Absolute Space.  The sacred name of that Atom is the Sacred Ain Soph.

The Ain Soph is our atomic Star. This Star radiates within the Abstract Absolute Space full of glory, precisely in this order, Kether (our Father), Chockmah (the Son), and Binah (the Holy Spirit). Every human being emanates from this Star. The Ain Soph, the Star that guides our interior, sent its Ray into the world in order to become cognizant  of its own happiness.

Happiness without cognizance of happiness is not real happiness.

The Ray (the spirit ) had cognizance as a mineral, plant, and animal. When the Ray incarnated for the first time within the wild and primitive human body, the Ray awoke as a human being and had self-cognizance of its own happiness. Then the Ray could have returned  into its own Star that guides its interior.

Disgracefully,  within the profound bosom of the voracious and dense jungle, wild Desire gave birth to the “I.”  The  instinctive forces of nature trapped  the innocent mind of the human being and the false mirage of desire emerged.

Then the  “I”  continued reincarnating in order to satisfy its desires. Thus, we remained submitted to the Law of Evolution and of Karma.

Experiences and pain complicated the “I.”  Evolution is a complicated process of energy. The “I” became  strong with experiences. Now it is too late. Millions of people have been converted into monstrous demons. Only a tremendous revolution can save us from the Abyss. When the human being dissolve the “I,” then there is a complete revolution. Human being will stop suffering when they are capable of  dissolving the “I.”  Pain is the result of our evil deeds. Pain is Satan (the psychological “I”), because Satan is the one that makes the evil deeds.  The Abstract Absolute Space, the Universal Spirit of Life, is absolute happiness, supreme peace and abundance.

Transmute desire with alchemy and desire will be annihilated. Whosoever annihilates desire dissolves the “I.”  Whosoever dissolve the “I” is saved from the Abyss and returns into his own interior Star that has always smiled unto him.

Only with Holy Alchemy we can dissolve the “I.”  The fundamental base of Alchemy is the Arcanum A.Z.F.  The angels, Archangels, Seraphim, Potencies, Thrones, etc., are the exact outcome of  interior revolution

We already passed through an Involution (the descend of the Spirit into Matter). We already suffer horribly in the Evolution (a complicated processes of the energy). Now a complete REVOLUTION is urgent (the dissolution of the “I”). No one can be happy until reaching this interior Star. We return to the super divine Atom only on internal revolutions; little by little, we pass through the Angelic, Archangelic, Seraphimic, Logoic, etc., states until finally the Ray will fuse with the Star, the Ain Soph that shines with happiness.

The Abyss is Terribly painful. The horrible antithesis of the Ain Soph is the Abyss, the Klipoth of the Kabbalah. The Klipoth are atomic, tenebrous, they belong to the Lunar Path.

If we self observe the picture above, we can analyze the divine primordial Atom from which the ten Sephiroth of the Kabbalah emanate. 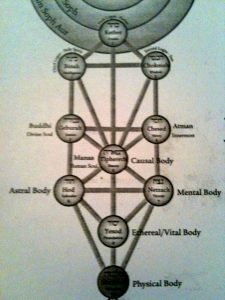 If we self observe we find:

2. The Ethereal or Viral Body

3. The Astral Body or Body of Desire

5. The Essence (normally bottled up within the “I”).

Beyond the Essence exists the divine Triad that is not incarnated within the human being.

7. The Buddhic Body, the Divine Soul

8. The Atmic Body, the Innermost.

Atman, in Himself, is ineffable Being, the one who is beyond  time and  eternity, without end of days. The does not die , neither reincarnates (the ego is what returns), but Atman is absolutely perfect.

The Mental Body, the Body of Desires, the Ethereal Body, and the Physical Body integrate the personality.  The Essence remains bottled up within the ego when penetrating these bodies. That which returns is a fraction of the Human Soul.

Beyond the Theosophical Triad exist a Ray that unites us to the Absolute.  This Ray within the human being is the Resplendent Dragon of Wisdom,  the Internal Christ, the Sephirothic crown; the Kabbalah describes it as follows:

Kether: The ancient of Days.

Chokmah: The Son, the Cosmic Christ.

The Sephirothic Crown is the First Triad which emanates from the Ain Soph.

In the final synthesis, each one of us is nothing but an atom of the Abstract Absolute Space, the Ain Soph, which is found to be related with our Pineal gland, the Sahasrara Chackra.

It is Obvious that the four atomic seeds are absorbed within the super divine atom, the Ain Soph Paranishpanna, along with the Essence, spiritual principals, laws and the three primary forces. Afterwards, the profound night of the Mahapralaya comes.

The Ain Soph without intimate Self-realization does not possess the four atomic seeds; it is just a simple atom of the Abstract Absolute Space with only three primary forces, Father, Son, and Holy Spirit, within.

The Paranishpanna atom of a Master that has been liberated is very distinct from the Ain Soph atom that is without Self-realization.  In the aurora of the Mahamanvantara, a Self realized Master unfolds his bodies by putting theirs germs into activity. He possess his Solar Bodies; he can restore  them at any moment that he wishes.  The fact of having built these bodies gives him instant cognizance.

The Ain Soph that possess the atomic seeds can reincarnate at the hour that It pleases, and It remains dressed with Its Solar Bodies.  When the Ain Soph wishes to manifest itself, it emanates those solar atoms seeds and appears at any given place in space.

There is a formula that defines all of this= C. O. N. H.  These are four forces, the four bodies of the initiate, four bodies with which the Seity is dressed when the Seity wants to be manifested.

1.   C- Carbon.  In Alchemy, the letter “C” symbolizes the Conscious Body of Willpower; it is the carbon of Occult Chemistry.

2.  O- Oxygen.  In Alchemy, the letter “O” symbolizes the true Solar Mental Body which was built by the Forge of the Cyclops, the oxygen of Sacred Chemistry.

3.  N- Nitrogen.  In Alchemy, the letter “N” symbolizes the authentic Solar Astral Body of Desires.  It is obvious that the legitimate Sidereal Body is the nitrogen of Occult Chemistry.

4.  H- Hydrogen.  In Alchemy, the  “H” symbolizes the Physical Body, the three-dimensional vehicle of  flesh and bones.

The four atoms are within the Ain Soph Paranishpanna and from there emanate  the four bodies with which the Seity dresses Itself. The Seity builds them instantaneously, in other words, at any giving moment, when the Seity wishes to work in a world for the good of humanity, and then It appears Self-realized, a self-cognizant Master, owner of life and death.

The three primary forces are:

The Holy Affirmation: The Father

The Holy Reconciliation:  The Holy Spirit

These three primary forces manifests themselves through the three atoms C. O. N.  (carbon, oxygen, nitrogen). The H (Hydrogen) is a force that is independent from the other three. Therefore, it is the physical vehicle  which serves as an instrument for the Body of Will, Mental, and Astral Bodies.

We do not exaggerate if we emphasize the Alchemist’s transcendental idea that an Ain Soph Paranishpanna atom possesses within itself the four atom seeds C. O. N. H.

With these four alchemical atoms, the Ain Soph Paranishpanna rebuilds the Mercabah, the Chariot  (the Solar Bodies), in order to enter into any Universe when it is necessary.  We must not forget that the Mercabah is the Chariot of the Centuries, the Celestial Human Being of the Kabbalah.  As a sequence or corollary,  we can and we must affirm that those who have not performed the work in the Ninth  Sphere (the sex) indeed do not possess the Chariot, the Mercabah.

It is unquestionable that everything changes in the active field if the Prakriti due to the modifications of the Traigunamayashakti, and that we, the human beings also modify ourselves in a positive or negative way. But if we do not build the Chariot, the Mercabah, the Ain Soph remains without Intimate Self-realization. Those who have not eliminated the Abhayan Samskara, the innate fear, will flee from the Ninth Sphere by telling unto others that the work in the Forge of the Cyclops (sex) is worthless.

These are the hypocritical Pharisees who drain the mosquito and swallow up the camel. These are the failed ones who did not enter into the Kingdom, thereby not allowing others to enter. Truly, sex is a stumbling rock and a rock of offense.

And we are not speaking of bestial sex, and or sexual immorality from the degenerated humans. Those informed know exactly what we are speaking about. Sex is sacred.

11 thoughts on “Our Atomic Star the Ain Soph Paranishpanna”