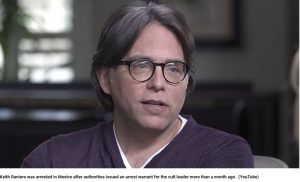 Take down: expose worldwide the Satanists Demons that aim has been that of destroying the creation: humiliating, and stealing from our people all ways for their ultimate gain, power, and pleasures with their “supposedly intellectuality+ cleverness.” Do your own research, and like we have been stating, “know the enemy. Confront the enemy because this is the only way we can destroy them.” Navigate the following written report below, and as well watch the videos below for your ultimate awareness.

BUT FIRST let us show some images of the Sergey Brin family, that are Russian Jews= intellectual geniuses that migrated to our country, then found out the idea for making huge amount of wealth by cunning, stealing, and hear this, stealing: storing even our own DNA! These geniuses are part of the ones that invented Google, Youtube, and some analytic systems. The bottom line here is that they used their ingenuity for harming the existing instead for empowering us all. ~ – = For they are using electronics terrorism for destroying the existence!

These evil geniuses are all connected believe it or not for doing the people harm, inclusive for all known and unknown wealthy Royals, and criminals conmen like George Soros, Bill Gate, Jeff Bezos, the BAR, etc., and the entire corporal terrorists enterprise that its specialties are  that for human trafficking: Slavery.

Keep in mind that human trafficking: Slavery are terms use for committed crimes against humanity: Human abuses committed any ways one can think of, like for example, identity theft= mortgage fraud= mail fraud= solicitation= violation= subordination= subjugation= diminishing= arbitrary contract issued by the corporal courts+ the BAR= racketeering= invasion= extortion [Building associations: Associations+ private entities…], + Jailing for profit: Killing spree, + Pedogate= kidnaping+ murdering+ abusing our children all ways, + Sex trafficking, + Organs trafficking= killings anyone for the fact of taking their organs and selling them! This is done in hospitals intentionally= they knowingly kill you+ killing anyone all ways by the demons in human form at any place of convenience, + infringements, + embezzlement, + even a speeding ticket issued by corporal police-pay for hire conmen= THE STATE: Wars: Harming our environment= chem-trails= poisoning our water+ our food supply+ destroying all creatures, + Treason= violation of trust(s)= funds= money, meaning they stole[ing]: Violated a trust(s) where there is: Was: Are funds that belongs for someone else, like for example us [The people]. The word “Treason” derives from the word TRUST. Treason is the highest crime in the universe punishable with death.

:We the people are commanding the taking down for these entities that are being destructive for our own existence immediately. ~ – = For they are committing atrocious crimes of: For electronic terrorism against the existence.

: Have courage people because the Creator, and the laws are with us! Fear NOT, thus get involve one since for all for cease and desist the worldwide unimaginable crimes against the existence: against our people: against our children. Stand up. Speak up. Share.

Our independent reporter is informing us thoroughly about these entities in the videos below.

A New York cult leader who called women his “slaves,” branded them with his initials and coerced them into sex acts was arrested in Mexico on sex-trafficking charges, authorities said Monday.

Keith Raniere, the co-founder of the Nxivm cult that began more than two decades ago, was taken into custody after Mexican immigration officials found him in a luxury Mexican villa near Puerto Vallarta, the Albany Times Union reported. He was reportedly staying at the $10,000-a-week villa with several women.

Raniere returned to Texas on Monday. He is expected to appear in court Tuesday in Fort Worth on the charges filed by federal prosecutors in Brooklyn.

Authorities said Raniere, who is known as “Vanguard” in the organization, formed a secretive group within NXIVM that had women join a slave-master club called “Dominus Obsequious Sororium,” which translates to “Master Over the Slave Woman.”

The women — usually thin because they stuck to low-calorie diets — were allegedly brainwashed into thinking the best way to advance was to become a “slave.” Raniere coerced the women into having sex with him and doing menial chores for “masters,” the criminal complaint stated.

The women also partook in videotaped branding ceremonies in which they had Raniere’s initials burned into their pelvic area.

“During the branding ceremonies, slaves were required to be fully naked, and the master would order one slave to film while the other held down the slave being branded,” the complaint said.

The women were allegedly threatened with public humiliation if they didn’t keep the arrangement a secret. Raniere punished the women for not following orders by forcing them “to wear fake cow udders over their breasts while people called them derogatory names,” court papers stated.

Other times, they were reportedly stuck in cages.

Raniere fled to Mexico last November after the government began interviewing potential witnesses about the cult leader’s alleged activities. The New York Times published stories of some of the women who defected from their secret sorority.

Federal authorities struggled to find Raniere for months because he used encrypted email and ditched his phone.

“The defendant was uncooperative when immigration authorities arrived and after he was taken into custody, the women chased the car in which the defendant was being transported in their own car at high speed,” court papers stated.

Raniere was promoted as a “scientist, mathematician, philosopher, entrepreneur, educator, inventor and author” who has “devoted his life to studying the human psychodynamic and developing new tools for human empowerment, expression and ethics,” the group’s website says.

Raniere and Nxivm have been the subject of criticism for years, dating back to at least 2012 when the Times Union of Albany published a series of articles examining the organization and the allegations it was like a cult.

Over the years, Nxivm has attracted a following that includes Emmy Award-winning actress Allison Mack. Authorities also say Raniere has been bankrolled by Clare Bronfman, an heiress to the Seagram’s liquor fortune.

The Associated Press contributed to this report.