Karl Langstein’s “buddy”, or at least his “top dog”, lol… I wonder if they found the purported 700 Million USD cash in Lance’s basement yet…or any of the other “cash stash” in the other million or so basements around China…oh my! <3

complete love, compassion, gratitude, and heartitude as the termination/jump is completed <3

by Billie Thomson, for Daily Mail, published on October 2, 2019

* Thirteen and a half tonnes of gold worth up to ??520million is found in a corrupt Chinese official’s home and ??30BILLION in suspected bribe money in his bank account

* Thousands of golden bars and bricks were discovered in a room during a raid?? Inspectors also discovered ??30 billion in suspected bribes on his account

A powerful Communist official in China is suspected to have received 13.5 tonnes of gold and????30 billion cash in bribes.

Thousands of??golden bars and bricks were discovered at the leader’s home during a raid by corruption inspectors earlier this month.

Their value could be worth up to ??520 million, according to international trading prices. 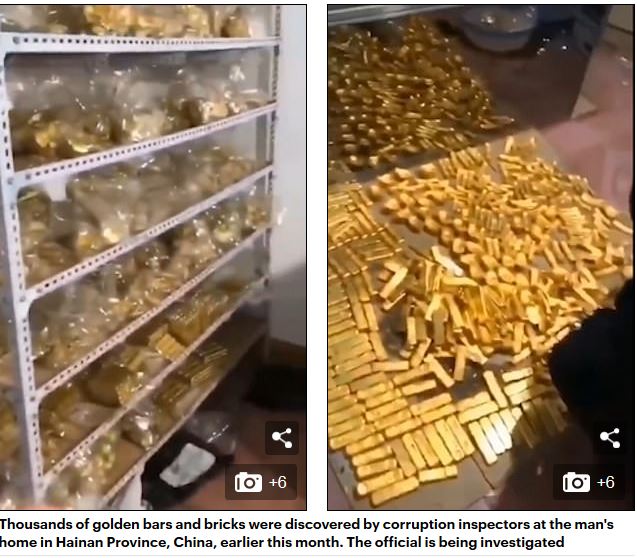 Thousands of golden bars and bricks were discovered by corruption inspectors at the man’s home in Hainan Province, China, earlier this month. The official is being investigated

Zhang Qi, 58, who was a top official in the province of Hainan has been sacked.??
In addition to the gold, inspectors discovered 268 billion yuan (??30 billion) in suspected bribes on the man’s account, according to reports.??

He was also thought to have received multiple luxurious villas as perks.??

If Mr Zhang’s alleged corruption turns out to be true, he would have been richer than Jack Ma, the wealthiest man in China worth??$37 billion??(??30 billion) according to Forbes.?? 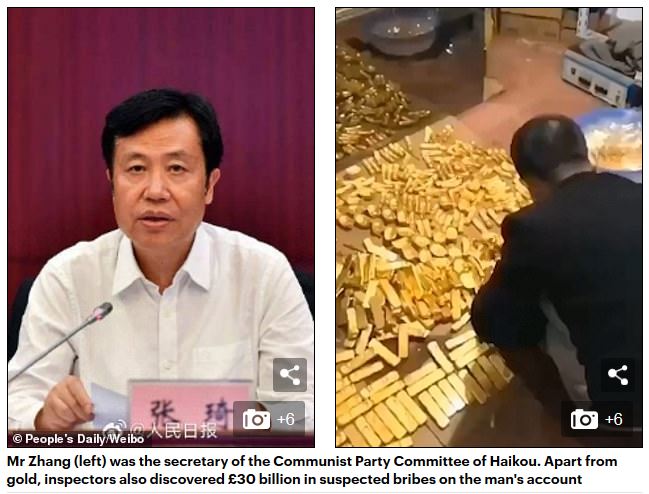 Mr Zhang (left) was the secretary of the Communist Party Committee of Haikou. Apart from gold, inspectors also discovered ??30 billion in suspected bribes on the man’s account

Mr Zhang was the secretary of the Communist Party Committee of Haikou, the provincial capital city of Hainan with a population around nine million people.??

He had equal power as the city’s mayor, according to the ranking of Chinese Communist party officials.??

He was also a member of the??Standing Committee of Hainan Province.

He has been stripped of both titles by the??Commission for Discipline Inspection of the Central Committee of the Communist Party of China. 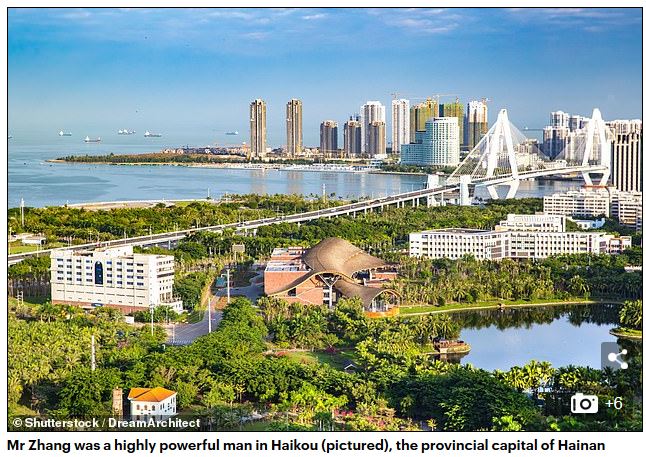 Mr Zhang was a highly powerful man in Haikou (pictured), the provincial capital of Hainan

Footage circulating on Twitter shows one person counting lumps of gold in a room believed to be in Mr Zhang’s lavish home.??

The clip and related news have been censored in mainland China.??

In a statement on September 6, the country’s corruption watchdog said Mr Zhang was suspected to have seriously violated the law and??discipline.??

He is currently under inspection and investigation from the authority.?? 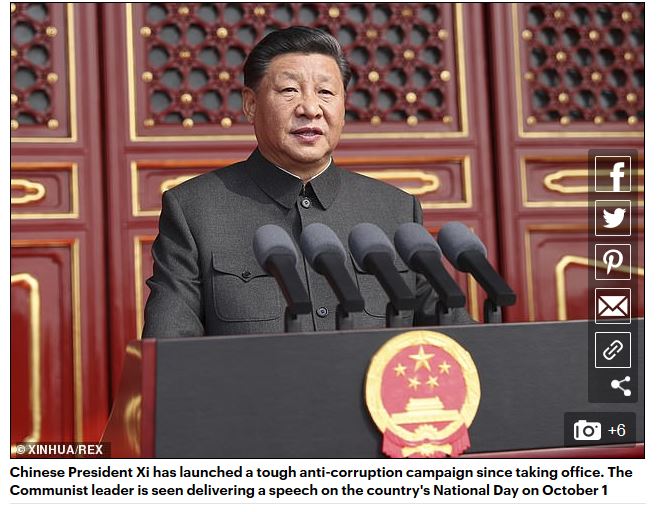 Chinese President Xi??has launched a tough anti-corruption campaign since taking office. The Communist leader is seen??delivering a speech on the country’s National Day on October 1

Mr Zhang was born in eastern China’s Anhui Province and joined the Communist Party in 1983.??

Before ascending to power in Haikou, he served as the deputy mayor of Sanya city and the mayor of Danzhou. Both cities are in Hainan Province.

Chinese President Xi Jinping has launched a tough anti-corruption campaign since he took office in 2012.??

Statistics show at least 53 officials have been caught receiving more than 100 million yuan (??11 million) in bribes in the past seven years in the nation. ??

Mr Zhang is the 17th senior official to have been investigated for corruption in China since the beginning of the year, according to Chinese media.