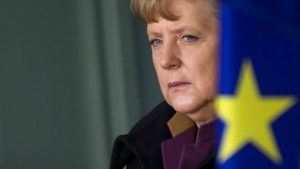 Europe is on the brink of collapse after Angela Merkel and President Frank-Walter Steinmeier failed to form a coalition government in Germany.

The German President has warned that the unprecedented situation could see the European Union fall into chaos if Europe’s “strongest country” in the EU can’t form a government.

“We are facing a situation which [we] did not face in the Federal Republic of Germany for almost 70 years,” he warned.

Rt.com reports: Steinmeier said that he will be holding talks with the leaders of all parties involved in the discussions, along with German institutions. He also stressed that all parties have a responsibility to try to form a government in the near future.

“All political parties elected to the German parliament have an obligation to the common interest to serve our country,” Steinmeier said. “I expect from all a readiness to talk to make agreeing a government possible in the near future.”

The Free Democratic Party (FDP) walked out of marathon talks shortly before midnight on Sunday, with its leader, Christian Lindner, saying there was “no common basis of trust” between the FDP, German Chancellor Angela Merkel’s center-right CDU party, and the Greens. He said it was “better not to govern than to govern badly.”

The walkout effectively led to the breakdown of the coalition talks and a potential attempt to form a majority government.

Explaining the motives behind its walkout, the FDP pointed to what it sees as a lack of compromise from other parties on key issues including tax cuts, curbing red tape and education policy, according to the party’s negotiator, Joachim Stamp.

The current major partner of Merkel’s CDU, the Social Democratic Party (SPD), had earlier signaled it would not engage in another grand coalition. On Monday, SPD leader Martin Schuls reiterated the decison.

Schulz also said that German voters, whom he referred to as “the sovereign,” should be given the chance to “reassess what is going on” following the failed talks. He added that his party is not afraid of new elections, should they take place.

Merkel’s CDU received the largest percentage of votes (32.9%) in the September election, with the SPD placing second with 20.5% of the votes. Die Linke (Radical Left) and the Greens both received around 9%, while almost 11% went to the FDP.

Meanwhile, the right-wing and anti-immigration Alternative for Germany (AfD) party made a historic gain in the September election, becoming the third-largest power in the Bundestag after winning over 13% of the vote. The result made it the first overtly nationalist party to have a place in the German parliament in 60 years. Support for the anti-immigrant movement rose following the 2015 refugee crisis, which saw Germany accept more than one million asylum seekers.

Chancellor Angela Merkel has faced massive criticism for her open door policy ever since, with numerous rallies featuring banners like “Merkel Out” and initiatives teaming up under the hashtag “not my chancellor.”

Maximilian Krah, a former member of Merkel’s CDU, told RT that the refugee issue was rather central to the collapse of the coalition talks.

“If you read the declaration of the liberals when they broke up the coalition talks yesterday night, the migrant crisis was just one word among a lot of others but no one believes that they broke up because of the debate on ‘Industry 4.0’ or digital industry,” he said.

Editor-in-chief at Your News Wire
Navigate:

RABBI QUOTES THAT MAKE YOUR STOMACH CHURN WITH REVULSION AND REPULSION