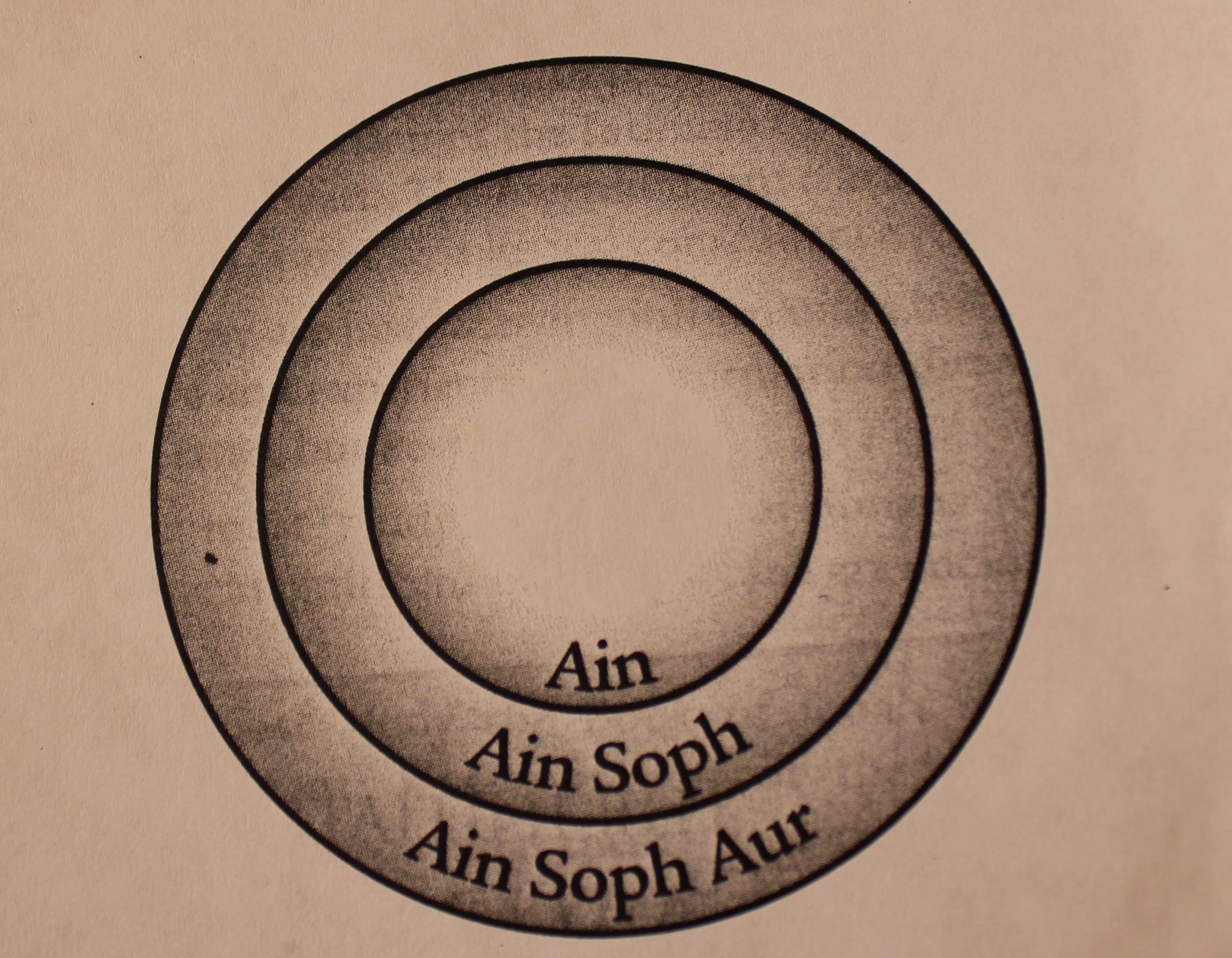 We  said previously that the Absolute has tree aspects and those are: The AIN, THE AIN SOPH, and the AIN SOPH AUR. The AIN  is far beyond Gods and human being; it is beyond Time, Number, Measurement, and Weight. It is beyond Casualty, Form, Fire, Light and Darkness. Nonetheless the AIN is the Fire and the Uncreated Light.

We now continue with the second aspect which is the AIN SOPH.

All creation emanates from the AIN SOPH, but creation, in essence and in potency, is not equal to the AIN SOPH.

The AIN SOPH irradiates intelligence, a power by means of its divine Uncreated Light. An intelligence, a power that originally participate in the perfection and plenitude of its AIN SOPH own Creed. This Creed has a finite aspect because it is being derive from  the AIN SOPH. Unto this first spiritual emanation of the AIN SOPH the Kabbalah gives the name of Ineffable Ancient of Days who is the Being of our Being, the Father/Mother within us.

The AIN SOPH, not being able to express Itself in the limited physical plane, does it through its “Ten Sephiroth.”

After the Great Prayala, before the beginning of the intensive palpitation of the Flaming Heart of this Solar System called Ors in which we live, move, and have our Being, time did not exist. Time was lying asleep within the profound bosom of the Abstract Absolute Space. If at the end of the Mahamanvantara the seven basic dimensions of the Universe remain reduced to a simple mathematical point which is lost as a drop of water within the Great Ocean, then it is evident that time ceases to exist.

The worlds, human beings, animals, and plants are born, grow, age, and die. Everything that exist under the Sun has a defined time. Ancient wisdom states that Brahma, the Father, the Universal Spirit of Life is submerged within the Abstract Absolute Space during Seven Eternities when the Great Night= that which the Hindustanis named Prayala, or dissolution of the Universe arrives. The Seven Eternities signify “Evos,”  or totally defined, clear and precise, periods of time.  A Mahakalpa, Great Age or Great Day, has a totality of 311,040,000,000,000 years. It is obvious that a Mahaprayala, a  cosmic Night, is equivalent to the same quantity of time.

When the profound Night for the Creators of this Solar System arrives, they will be absorbed within the bosom of the Absolute, and only a group of moons will remain, and the planets, the Sun, the Earth, and life with all its virginal sparks will disappear. A virginal Spark corresponds to each one of us; a virginal spark correspond to each living creature, and these sparks are absorbed within the Absolute for Seven Eternities.

If we observe Selene= our moon, we will see that it is a cadaver, but that it had plenty of life, oceans and volcanoes. There are moons that rotate around Mars, Saturn, etc., which had plenty of life in the previous cosmic Day.  In the previous Mahamanvantara, which was called “padma” or the Lotus of Gold, there was a humanity with seven Root- Races on the moon, and it died.

The Universe was sleeping within the terrible Obscurity before the Dawn of the Mahamanvatara. The Eternal Black Light or Absolute Obscurity is converted into Chaos in the beginning or the Aurora of each Universe. Ancient wisdom states that Darkness is in itself Father/ Mother, and Light is its Child. It is evident that the Uncreated Light has an unknown origin, absolutely unknowable to us .

Let us talk about the borrowed, secondary, Cosmic light. It is obvious that what ever its origin might be, and what ever its beauty might be, it has in its depth a temporary Mayavic (Maya, illusion) character.   Therefore, the profound ineffable Darkness constitute the Eternal Womb within which the origins of Light appear and disappear. If we are placed in this Darkness, we will see nothing but an Abyss and profound Darkness, but for the inhabitants of the Absolute the Paramarthasattyas, the Darkness is Uncreated Light which is not created by any God or human being, and where only an inexhaustible happiness and inconceivable joy reigns.

The Gods emerge from the Abyss by means of fire, and they get lost within the Absolute. Light and Darkness are two phenomenun of the same noumenon, which is unknown, profound, and inconceivable to the reasoning.

“What is light for us is darkness for certain insects, and the Spiritual Eye sees Illumination where the normal eye can only see obscurity.”

After the Mahamanvantara, when the Universe is immerse into a Prayala, when it is dissolved within its primordial element, it necessarily reposes within the profound Darkness of the Infinite Space.  It is urgent too deeply comprehend the profound mystery of the Chaotic Darkness. The Cosmos emerges from the Chaos, and Light sprouts from from the Darkness. Let us profoundly pray!

It is written with words of fire in all of the sacred books of the world that the seed-plot of the Cosmos is the Chaos. The nothingness, the Chaos, is certainly, and without a doubt, the Alpha and the Omega, the beginning and the ending of all the worlds which live and palpitate in the unalterable Infinite. That Abstract Seity, the primitive Zero-Aster of the Parsis, is the life-Saturated Nothingness.

God himself. In other words, the Army of the Voice, the Verb, the Great Word, dies when the Great Pralaya, Cosmic Night arrives, and is reborn terribly divine in the Aurora of the Divine Mahamanvatara.   The Absolutely radical Zero in transcendental arithmetic, the Abstract in Geometric, the Unknowable “Seity.” (do not confuse it with Deity which is different), is not born, nor dies, nor reincarnate.

In the profound Night, only Darkness alone filled the boundless all, for Father, Mother and son were once more one, and the Son has not awakened yet for the new Wheel and His pilgrimage thereon. It is written with characters of unmistakable fire in the Books of the Great Life, that at the end of the Mahamanvatara, Osiris, Isis (the Divine spirit) are integrated and fused like three fires in order to make one single flame.

Let us search for Osiris, Isis, and Horus within ourselves, within the unknowable profundities of our Being. Did you hear about Brahama?  He is in Himself Father- Mother- Son.  In each new Cosmic Aurora, the Universe resurrects, like the Phoenix Bird, from within its own ashes. In the Dawn of each Mahamanvantara, the Monad unfolds again into the Duad and into the Triad.

At the Day- Break of the New Cosmic Day, after the profound Night, the Son, the triad, Horus (the Divine Spirit in each one), emanates the essence, His Mystic Principles, from Himself into the Wheel of Samsara with the purpose of acquiring a Diamond Soul. Ah! How great is the joy of Horus when acquiring a Diamond Soul! Then, He is absorbed within His Divine Mother, and She also fused with the Father, who form a unique Diamond Flame, a God of resplendent interior beauty.

Space is filled with Universes, and while some Systems of Worlds are emerging from the Profound Night, others are arriving at their sunset.  Here are cradles, and far away there are sepulchers.  When the Aurora of the Mahamanvantara is initiated, the Heterogony unfolds into the Homogeneity, and the Army of the Voice (God) is born again in order to create anew.

The Universe emerged from within the bosom  of the Absolute, and the Uncreated Light sank into a nostalgic sunset. Thus, this is how the Gods and human beings descended within the shadows of the Universe. The sacrifice was consummated, and the Kabbalah registered in its Mayor Arcanum No. 12. If we add the number Twelve in itself, it gives us Three.  One is the Masculine Principle= the Fire. Two is the Feminine Principle= the Water, the Semen. Three is the Universe= the Son.

The present Cosmic Day is symbolized by a blue Pelican which is opening its chest with its beak in order to drink from its own bosom from which all creation sprouted.