FULL MOON IN SAGITTARIUS: A CHANGE OF SEASONS

Read on everyone… On this Summer Solstice we want to create a field of United conscious energy that reads:

We want RV for every man, woman, and child now

We want abundance for everyone, peace, harmony, joy, and spiritual growth for all the living of planet earth.

Let us all hold that energy with our heart’s frequency of love, and bringing all that we want to manifestation.

We are having another Sagittarian Full Moon on Monday, June 20th aligned with the Galactic Center. This will be the second one in this sign occurring back to back, as the last Full Moon a month ago was in the beginning of Sagittarius while this one is at the end of it. This is basically an astrological ‘Blue Moon’ instead of a calendar version, although this isn’t something that is recognized and acknowledged. It will occur at 11:02am Universal Time (Click here for your time zone).

This Full Moon is a very significant one for many reasons. Firstly, as mentioned above, it will occur near the Galactic Center. Secondly, this moon cycle started with a New Moon that was part of a Grand Cross in Mutable signs, and this Full Moon will also have a Grand Cross with Mercury as the trigger. Thirdly, this Full Moon will be at the last degree of Mutable sign Sagittarius on the cusp of Cardinal sign Capricorn, and the Sun on the cusp of Gemini/Cancer.

The cusp between Mutable signs and Cardinal signs represents a transition more so than the other cusps. When the Sun is on these cusps, this is when we enter a new season signified by the Solstices and Equinoxes. Since this Full Moon is occurring less then 12 hours before the Solstice, symbolically it is like we are about to enter a new season in our lives. The period from late January 2016 until September 2016 is strongly under the influence of the Solar Eclipse in Pisces that we had on March 8th, and this Full Moon is also a major trigger of that energy.

The energies of this Full Moon have been building up in the previous two weeks so you may have noticed the themes (written below) already playing out in some way and continuing to play out strongly in the days following.

The Moon in Sagittarius is opposing the Sun in Gemini. This can manifest as tensions: beliefs/opinions versus the facts, intuitive mind versus rational mind. Sagittarius is about exploring new territory while Gemini is about the immediate environment. Due to this Full Moon occurring at the tail end of these signs, there is potentially a theme of completing something related to these energies.

The Galactic Center is also closely aligned with this Full Moon. This part of the sky represents motivation, divine inspiration, and destiny in serving our spiritual evolution.

Chiron, representing our negative patterns and blockages, is in a square aspect with this Full Moon. This energy brings out the themes of the last Solar Eclipse, suggesting the need to overcome our limitations related to our wounds and fears, to gain or regain our personal power.

Mars is almost finishing its retrograde in Scorpio, which is reinforcing some of this Chiron energy. Since April 17th, we’ve been going through a process of recalibrating how we assert ourselves. In the days and/or weeks after Mars goes direct on June 29th/30th, we will have a new sense of power and will be able to accomplish more based on the lessons, skills, awareness, and healing we have acquired during the 2.5 months prior.

Venus in Cancer is conjunct the Sun and opposite the Full Moon. The Moon will be in Capricorn when it makes the exact opposition. Our needs and emotional security around our career, ambitions, structures, and our goals is at odds with Venusian aspects, such as pleasure, love, and Cancer themes of nurturing, emotional connectivity, and family. Learning to either balance the two or integrate them may be a theme for some.

As mentioned above, there is a powerful Mutable Grand Cross during this Full Moon, similar to the one that occurred on the New Moon. Like other aspects, this also signifies a major change and transition that is is strongly connected to the last Solar Eclipse as well.

Mercury in Gemini is opposite Saturn in Sagittarius, square Neptune and the South Node in Pisces, which is opposite Jupiter and the North Node in Virgo. This is an overwhelmingly scattered energy. There is a clash between intellect/communication, limitations/discipline/reality, dreams/escapism/fantasies, and expansiveness. 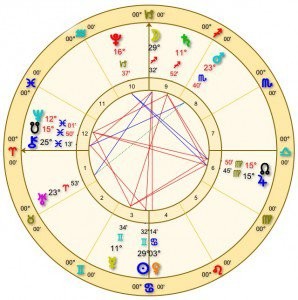 Jupiter on the North Node in Virgo is the main focus, which is about expanding work/productivity, efficiency, organization, and good health. We may have to adapt and embrace change in order to take on different types of tasks, duties, and work in order to achieve our future goals.

The 2nd square between Neptune and Saturn occurred in the days leading up to this Full Moon, so its effects are extra potent. This aspect started in Fall 2015 when it made its first square. Saturn represents boundaries, limitations, restrictions, structures, reality, and responsibilities. Neptune is spiritual and compassionate; this energy can dissolve structures and boundaries of Saturn, and demonstrates that everything is connected.

When this Neptune and Saturn square first started, we were hearing about the Syrian refugee crisis and there were debates in different countries about whether or not they should open their doors to them. This was literally a debate between compassion (Neptune in Pisces) and restricting (Saturn) access for these foreigners in their nation (Sagittarius).

We are also seeing this with the U.S. Presidential race with Donald Trump wanting to restrict access to the country, taking on the Saturn side of the square. This topic has heated up even more due to the recent terrorist attacks in Orlando. On a positive note, this tragedy has also created a situation that has found the world showing so much compassion towards the LGBT2 community, dissolving homophobic beliefs in some people and realizing that we are all one.

Things To Consider For This Full Moon

For many of us, this can be a period of great change and the need for adaptability in light of new circumstances, which will be overwhelming for some. What’s holding you back from proceeding in a new direction that is more promising for your future? What is the source of your negative programming and which patterns keep repeating?

Take an objective look at any of your ‘old wounds’ that have been surfacing in recent times and make the effort to address them.  This article has some great tips to work with this and there are also modalities that can help you such as the Emotional Freedom Technique and the Biko Method which is a more well-rounded approach.

Any intentions , actions, or rituals you wish to do for ‘releasing’ should be done after the exact Full Moon, which is at 11:02am Universal Time on June 20th. The closer to the Full Moon, the better for intention, but any major actions can be done over the next week. Click here to find out the exact time of this Full Moon for your time zone.